Guardian, Muslim fashion: 'Anyone can wear these clothes'

"Riazat Butt meets the designer behind Elenany, a new fashion label for Muslim women that blends modesty and street cred."

Refers to social networking sites and blogs too, including Hijab Style.

Email ThisBlogThis!Share to TwitterShare to FacebookShare to Pinterest
Labels: fashion

"A stage version of The Black Album, Hanif Kureishi's critically acclaimed second novel, has opened at the National Theatre on London's South Bank." 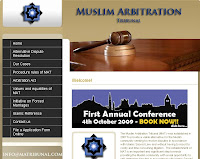 "The Muslim Arbitration Tribunal (MAT) said that 5 per cent of its cases involved non-Muslims who were using the courts because they were less cumbersome and more informal than the English legal system."

I have been writing about this elsewhere.
Posted by GRB at 11:22

Jonathan Freedland, Guardian, Heard the one about a rabbi, an imam and a priest, who walk into a bank?, 22 Jul 09 "Even before they've started, there's something to applaud here. It's refreshing for Jews and Muslims, in particular, to be working together – "exciting", says Dr Muhammad Abdul Bari of the Muslim Council of Britain – and for these communities to be engaged in interfaith action rather than another round of earnest tea-sipping in the name of "dialogue"."
Posted by GRB at 11:20

Ruth Gledhill, The Times, Swine flu may force Muslims to abandon Haj pilgrimage to Mecca, 21 Jul 09 "Britain has joined a number of countries in advising the sick, the elderly and pregnant women not to travel in the annual Haj pilgrimage because of the risk of swine flu."
Posted by GRB at 11:19

"Scholar denies that Islamic divorce procedure is biased against women"

Fiona Hamilton, The Times, Scholar denies that Islamic divorce procedure is biased against women, 21 Jul 09 "Opponents of Sharia have long complained that it involves an inherent bias against women and treats them as second-rate citizens.

"For visitors to the Islamic Sharia court in Leyton, East London, all it takes is a glance at the wall of the reception to shatter any remaining illusions of equality. A flow chart outlines the process of obtaining an Islamic divorce. The left side of the chart, depicting the procedure for a man, is relatively simple: all he must do is tell his wife that he is seeking a dissolution, or talaq. The right side with its series of converging lines depicts the much more complex process for women, known as khul’a."
Posted by GRB at 11:17

washingtontimes.com, Rabbis, imams visit U.S. for dialogue, 20 Jul 09 "A group of 28 imams and rabbis from 10 European countries arrived in New York and Washington this week for whirlwind visits to interfaith centers to break new ground on Muslim-Jewish relations and combat Islamophobia and anti-Semitism in each other's communities."
Posted by GRB at 11:12

AP, UK man convicted over suicide bomb plot, 18 Jul 09 "Ibrahim had claimed in court that he planned to detonate the vest safely, without wearing it, and post a video of his experiment on the YouTube Web site ...

" ... Police said Ibrahim was not known to authorities and appears to have become radicalized by researching extremist Islamic material posted on the Internet."

thisisbristol.co.uk, Steve Scott: What is your child up to on the internet? "That he didn't cause carnage and destroy innocent lives is purely down to a few astute worshippers from Bristol's Muslim community who tipped off police about Ibrahim's extreme views, erratic behaviour and suspicious injuries to his hands." Op-ed

Telegraph, Terrorist Andrew Ibrahim was turned in by the Muslim community , 18 Jul 0 "Ibrahim is thought to be one of the few examples of a "self-radicalising" terrorist who downloaded videos by the extremist preachers Abu Hamza and Omar Bakri Mohammed."
Posted by GRB at 11:11

Rachel Smalley, VOA, London Terror Bombings, Four Years Later, 6 Jul 09 "It has been four years since four suicide bombers detonated bombs on London's transport system killing 52 people. The July 7 attacks left Britain reeling and in the months that followed, the government began working with the country's Islamic leaders to try to stop young Muslims from turning to extremism. Yet, while a recent report found that almost 80 percent of British Muslims identify with their country, only ten percent feel they are an integrated member of society."

Refers to the work of Muslim Youth Net.
Posted by GRB at 11:40

Email ThisBlogThis!Share to TwitterShare to FacebookShare to Pinterest
Labels: politics

Refers to arson protest against Sherry Jones’s novel The Jewel of Medina
Posted by GRB at 11:32

I attended the BRISMES 2009 conference last weekend. It was a well-organised conference, with several interesting papers. It was interesting to hear Dale F. Eickelman in conversation with Muhammad Shahrur. I gave an iMuslims themed paper, timed against the men's singles final at Wimbledon(!). Mainly discussed Web 2.0 and Islam, and Iran. Co-speakers on the panel were Edmund Herzig on ISNA, and Mohamad Zayani on transnational Arab media: plenty of good questions, mainly asking me about all the stuff I cut from the paper due to lack of time. Also chaired 'Islamic Movements in Focus' - 8.30 on a Sunday morning (some good papers, and people actually turned up at that time!). I helped promote the HEA Islamic Studies network. The day concluded with a visit to Old Trafford - very cool place for academic visit. There were several good Arab restaurants near to the conference, which I took advantage of - stocked up with enough Turkish coffee for a month or two as well, so should stay awake while blogging late at night.
Posted by GRB at 22:52

The BRISMES annual conference 2009 is in progress. Details: ‘Frontiers: Space, Separation and Contact in the Middle East', University of Manchester.
Posted by GRB at 18:02

Daily Mail,Conspiracy fever: As rumours swell that the government staged 7/7, victims' relatives call for a proper inquiry, 3 Jul 09 "Mr Naseem, a well-educated man, had made 2,000 copies of Ripple Effect for members of his mosque. Research has revealed that even before the contentious video came out, one in four British Muslims thought the Government or the Secret Services were responsible for the 7/7 atrocities. Now the number of doubters is growing."

The video is available on DVD and online (such as here at Google Video)
Posted by GRB at 18:02